Difference between revisions of "Body Count" 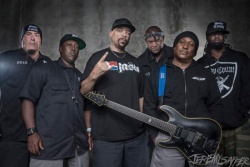 Body Count is an American metal band formed in Los Angeles, California, in 1990. The group is fronted by Ice-T, who first established himself as a rapper but co-founded the group with lead guitarist Ernie C out of their interest in heavy metal music. Ice-T took on the role of vocalist and writing the lyrics for most of the group's songs. Lead guitarist Ernie C has been responsible for writing the group's music. Their self-titled debut album was released on Sire Records garnered much attention due to a controversy around the song "Cop Killer".

Body Count’s label, Sire Records, and their parent company, Warner Bros. Records, defended the single, however Ice-T chose to remove the track from the album because he felt that the controversy had eclipsed the music itself. The group left Sire the following year. Since then, they have released five further albums on different labels.

Ice T confirmed that Amy Lee will feature on their new album, Carnivore, which will be released on March 6, 2020.[1]