Twitter is a popular social networking and micro-blogging website. Users send and recieve short messages called "Tweets" which are limited to 140 characters in length. Users can follow others whose "Tweets" they are interested in and remain updated by recieving followed Users messages. The updates can be written via website, via SMS, with instant messaging programs, via e-mail, or with applications based on the Twitter APIs. Twitter was created during March 2006 by Obvious Corporation of San Francisco. It is possible to choose whether to restrict the view of the messages or to make them be available for everyone. 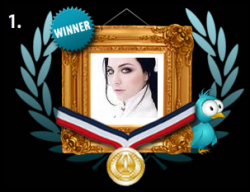 On March, 2010, [Amy Lee]] could be voted as Ms. twitter of the month[6]. A great number of fans partecipated and many urgings were made. It was possible to vote once every 20 minutes. This is what is reported in the site hosting the votes:

This is what Amy said about being the winner of the contest: