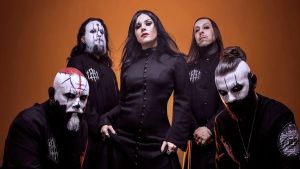 Lacuna Coil Lacuna Coil is a gothic metal band from Milan, Italy. Since their formation in 1994, the group has had two name changes, being previously known as Sleep of Right and Ethereal. Inspired by the combination of gothic imagery and music, the members have been known, musically, for composing mid-tempo songs consisting of prominent guitar lines and contrasting dual female/male vocal harmonies to help create a melodic, detached sound. Much of the band's recent material, however, sees a heavier and more down-tuned style, featuring a more distinct bass line and a higher mixing of the guitars within the songs. Cristina was rumored to be a member on EvBoard.

In an interview with MTV on August 26, 2004, Cristina said that she doesn't mind Lacuna Coil being compared to Evanescence;

Vocalist Cristina Scabbia features in part 22 of Jen Majura's 1 minute jams alongside Ruud Jolie of Within Temptation where they covered How Do You Do! by Roxette. Watch the video here.