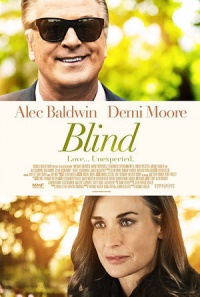 The sypnosis for the movie on IMDB says; "A novelist blinded in a car crash which killed his wife rediscovers his passion for both life and writing when he embarks on an affair with the neglected wife of an indicted businessman."[1]

It was first announced that Amy was writing music for the movie in an MTV interview on September 14, 2016, when she was promoting her children's album Dream Too Much.[2] She attended the film's premiere at Woodstock Film Festival in New York on October 13, 2016. This is what she had to say in an interview at the after-party;[3]

On February 21, 2017, it was confirmed on Twitter that the title of the song Amy wrote for the film is called Through Your Eyes.[4] In May, The New York Times posted their Summer Movie Release Schedule for the year which said that Blind will be released on July 14th.[5]

In an exclusive interview with fan site, Evanescence Crew, Chuck Palmer confirmed that Amy also wrote another song called The Final Leap and as well as vocals, Amy created "some incredible instrumental compositions".[6]

Two days before the film's release, they confirmed the selected U.S. theaters where Blind will premiere.