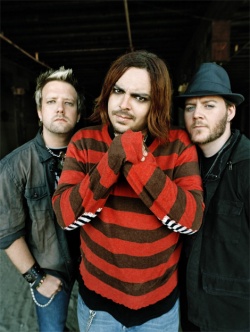 Seether is the name of the band that supported Evanescence in their tour in 2004. Shaun Morgan, the lead vocalist and guitarist of the band, is well-known in the fan community for his relationship with Amy Lee.

The band's origin is South Africa. While still there, the band was called Saron Gas. They changed their name after a request by their new label, Wind-Up Records, to Seether before releasing their first full-length album, Disclaimer.

Seether are also known for their collaboration with Amy in Broken, included in the album Disclaimer II. The song became a hit and increased the album's popularity.

Shaun Morgan went to rehab for unspecified reasons in August 2006. His apparent struggle with addictions and how it affected Amy and Shaun's relationship is the main subject in Evanescence's Call Me When You're Sober. Their breakup was the main inspiration on The Open Door. He now is out of rehab.

The band released Finding Beauty in Negative Spaces in October 23, 2007 (October 19 in South Africa). According to Shaun, the album doesn't contain any song in response to Call Me When You're Sober:

Nevertheless, it is obvious that Breakdown was written about Shaun's breakup with Amy (So break me down if it makes you feel right/And hate me now if it keeps you alright). Shaun said about the song:

The first single off the latest album, Fake It, has reached #1 in the U.S. Mainstream Rock chart.

This is what Morgan had to say about Evanescence:

Examiner: Has the label wanted you to work with Amy again because that collaboration was so successful for them?

Morgan: I don't think we would work together again, not while Seether and Evanescence are two separate entities. At this point, the label understands how I feel about that and wouldn't force the issue, and they could very easily. They have more respect for us as people than that and that's great.

Seether band member, Dale has (or had) a girlfriend, Faith, who was Amy Lee's roommate.

In September 2008, Evanescence tour guitarist Troy McLawhorn permanently joined the band after being a tour member (as he did in Evanescence). He wrote with them on the 2011 album Holding Onto Strings Better Left to Fray, before leaving the band a couple of months before its release and soon afterwards he became a permanent member of Evanescence, recording guitar on the 2011 self-titled album.[2]