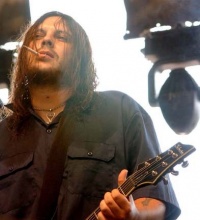 When Seether's album, Finding Beauty In Negative Spaces was released in 2007, its third single, Breakdown, was rumored to be about Amy Lee.[2] The music video for Breakdown also featured Troy McLawhorn, who had joined the band earlier that year.[3]

Shaun also sang John LeCompt's words in Bring Me to Life once during the Evanescence concert in Noblesville, Indiana, on August 3, 2004.[4]