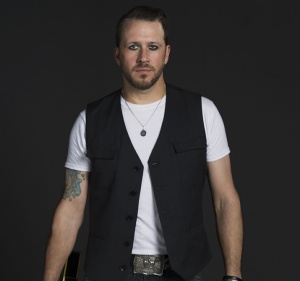 After the demise of his first band, Still Rain, McLawhorn helped form doubleDrive in 1996 and landed a recording contract with MCA records in 1998. After scoring a top 20 hit at active rock radio with the song "Tattooed Bruise" with the help of program director Dick Shuetz at WJRR in Orlando, Fla. The band left MCA and signed a new deal with Roadrunner Records in 2001 and released their second album Blue In The Face with the song "Imprint" reaching into the top 20 also. McLawhorn was an active member until December 2003, when the band broke up.

Upon the breakup of that band he along with Corey Lowery and Will Hunt began working on material together which would later become Dark New Day and would include good friends Clint Lowery and Brett Hestla. The lineup was one that had been hinted at years earlier. Dark New Day signed a recording contract with Warner Bros. Records in late 2004 and released the album 12 year silence which had the song "Brother" in 2005 which was a top 10 hit at active rock radio.

During Evanescence's break in 2014-2016, Troy started recording new music with a band called Not By Sight, formed by vocalist, Jane Train. Other band members included Corey Lowery of Saint Astonia and Morgan Rose of Sevendust. They released one song called Stand on January 6, 2016.[1] No other songs from this project have been released, and since Jane passed away in August 2017, there have been no plans to continue the project.

On May 17, 2007, it was announced that Troy was "borrowed" from Dark New Day to join as a live member for Evanescence, replacing John LeCompt, for The Open Door tour. Originally he was going to be playing with Evanescence until September, but ended up staying until the end of the tour in December.[2]

Amy said this on EvThreads:

Amy was asked in a interview about Troy and Will joining Evanescence:

After Evanescence's tour ended, Troy carried on with Dark New Day until he left in mid-2008 after joining Seether as a touring member. After Seether's tour was over, he became a full-time member as a lead guitarist.

When Evanescence were writing and recording for their third album with Steve Lillywhite in 2010, Amy Lee stated on EvThreads that Troy would not be joining them when they go on tour.

On March 8, 2011 Seether announced that Troy had left the band to "pursue other interests".[6] Later that day McLawhorn responded on the official "The Troy McLawhorn Fan Site" on Facebook with the following statement:[7]

On April 8, 2011, Seether frontman Shaun Morgan posted his frustrations on Twitter regarding Troy's still unconfirmed new gig. The next day Troy took to his official Facebook page to release the following statement to explain his departure:

Amy announced on Twitter in June 12, 2011 that Troy has joined Evanescence once again.[8] Troy posted this statement on his fan site the next day:[9]

After he rejoined he helped write some of the lyrics for Made of Stone, The Change and Erase This. He stayed with the band during their tour in support of the self-titled album until it finished in November 2012.

Troy continued with Evanescence when they announced that they were performing their mini-tour in 2015 and throughout the 2016 and 2017 rock shows.

After Amy announced Evanescence's electronic and orchestral album, Synthesis, Troy flew to Texas in August 2017 to record the guitar parts for the album. In October he joined the Synthesis Live tour in North America until December. He will continue to be a part of the live shows through 2018 in Australia, Europe and North America.