Fallen is the first full-length album by Evanescence, and their first album to achieve widespread release around the world.

Fallen was the eighth best-selling album in the U.S. in 2004, with about 2.61 million copies sold that year.[1] The album was recorded at Ocean Studios (Burbank) and Conway Recording Studios (Hollywood) both in California. The album reached 7x Platinium status on 24th June 2008 in the U.S.

This is one of the reasons that Fallen is called what it is. Ben Moody in an interview said that Fallen was made to let people know that they aren't alone when they feel alone or feel pain.

Fallen has sold over 17 million copies worldwide[2] and over 7 million in the US alone.[3] The album debuted at #7 and stayed above #40 on the Billboard Album Chart until mid-2014. The album stayed in the top 10 for 43 non-consecutive weeks. Released March 4th, 2003. It was recorded and mixed between late August and early December 2002.[4] The tour in support of the album lasted for nearly two years, ending on August 14, 2004.

The CD was re-released in January 2004 with the band version of "My Immortal". Fallen was Grammy nominated for Album of the Year in 2004. John LeCompt and Rocky Gray both had writing credits on Fallen before they officially joined the band. John has credits on "Taking Over Me" and Rocky has credits for writing the original version of "Tourniquet" (originally called "My Tourniquet") for his band, Soul Embraced.

A limited edition purple vinyl version of Fallen was released on the 10th Anniversary of its original publication (March 4, 2013). All the tracks were heavily remastered by Dave Fortman, and contained three B-Sides.

Songs were recorded as demos in pre-production before the recording sessions, and My Immortal, Imaginary, and Whisper appeared on earlier Evanescence recordings. 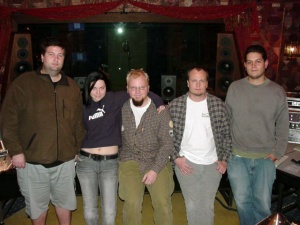 The album was recorded from late August to early December 2002 at Track Record Inc. and NRG Recording Studios, Ocean Studios (Burbank), and Conway Recording Studios. The guitars (Gibson Les Paul, Gibson SG, Mesa Boogie, Marshall Amplification) for the album were cut at Mad Dog Studios in Burbank with an old Mesa Boogie guitar cabinet.[4] Amy's vocals, pianos and the background vocal by the Millennium Choir were recorded at NRG Recording Studios.[4] Drum tracks were recorded at Ocean Studios, with Josh Freese playing on selected songs to click tracks of stereo guitars and vocals. The orchestral parts were recorded and mixed at The Newman Scoring Stage, Twentieth Century Fox.[6]

Recording work for the album started at Ocean Studios in Burbank, Calif., where most of Bring Me to Life was recorded for the Daredevil soundtrack, prior to full album production.[4]

Ben on the recording sessions:

Producer Dave Fortman was impressed with the band when he heard the initial demos, and his admiration of the group grew during the recording process.

The first single released from the album was Bring Me to Life, which was commercially released on April 22, 2003. It was written by Amy Lee, Ben Moody and David Hodges, and most of it was recorded at Ocean Studios in Burbank, California for the Daredevil soundtrack.[4] It went on to peak at number 5 on the Billboard Hot 100 chart.[7] The second single, Going Under, was released on September 9, 2003. The music video for it was filmed in Berlin, Germany on May 2003.[8] Imaginary was released as the third single in Spain only in November 2003. My Immortal was released as the third commercial single worldwide on December 8, 2003. It peaked at number 7 on the Billboard Hot 100 chart.[7]

Everybody's Fool was released as the fourth and final commercial single in 2004.[9] The music video for it was directed by Philipp Stölzl, the same director of the Bring Me to Life and Going Under music videos.

On the tenth anniversary of Fallen's debut, Amy Lee announced that 1,500 copies of the album will be released on a purple vinyl along with a digital scrapbook.[10] The scrapbook was made available to view on Evanescence's official website on March 19, 2013.

During Fallen's European tour, co-founding member Ben Moody left the band on October 24, 2003, around two weeks after filming the music video for My Immortal. In an MTV article, it says that on the morning of their show in Berlin, he packed up his gear and flew home, leaving the band's manager to break the news to the rest of the members.[11]

On August 24, 2010, Ben posted an open letter on EvBoard explaining in detail what happened when he left Evanescence and asked fans to not cause any more drama about it. When Amy was asked about the letter in an interview with Spin in October 2011, she said that she didn't respond and that "[they're] probably both better off not being in each others’ lives".[12]