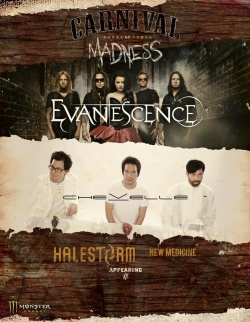 Evanescence announced on May 18, 2012 that they would be taking part in 2012's Carnival of Madness tour in the United States, along with Chevelle, Halestorm, New Medicine and Cavo.[1]

The tour began on July 31st in Springfield, Illinois and spanned 24 dates before concluding on September 5th in Evansville, Indiana. Evanescence's set at the Toyota Park in Chicago, Illinois on August 26th was cancelled due to severe rain.