In music, a single is a short recording of one or more separate tracks. This can be released for sale to the public in a variety of different formats including CD, DVD, Cassette, Vinyl, VHS and Digital Downloads, amongst others. Single releases are often made simultaneously in more than one format, as a single track download, and on CD or vinyl. Records with more than two A-sides are usually not considered singles, but EPs.

Although non-album singles are sometimes released, the lead tracks (and sometimes B-sides) of singles usually come from an album (either one already released or one about to be) and the release of the single is partly to promote sales of the album, and to ensure radio playlisting. CD singles often feature "radio edit" or "single edit" versions of the main song, which differ from the original recording in being edited to an attractive length for radio play, having expletives censored (often by re-recording with different lyrics), or both.

A typical number of singles to be released from an album is two to four—more is considered exceptional. However, since an artist's most popular songs are often singles later albums including their earlier works may have many.

Evanescence has commercially released a total of 19 singles. Those being:

It is worth noting that Evanescence received airplay before the release of Fallen from the songs Lies, Understanding, Even in Death, Whisper, Goodnight and Give Unto Me. Singles were probably not produced for these songs.

Amy Lee as a solo artist also has singles and collectible discs, promoting her work and songs as a solo artist. These all have been proven to be very rare and valuable as not very many copies of each promo were made, making them highly sought after. So far Amy Lee has 3 singles that come with promo discs:

It can be a costly hobby to collect Evanescence singles as a complete collection may cost thousands of dollars. Nobody is known to possess a "complete" singles collection, though there are a few who come close. There are roughly 200 known separate releases and countless others unknown.

There are obviously many rare singles, promos or albums that were either produced in limited quantities or contain exclusive artworks or tracks not found elsewhere (e.g. the Spanish release of Going Under). Items considered especially rare:

This single is undoubtedly one of the rarest singles with between 50-200 copies produced for distribution among Spanish radio stations. See: Imaginary Single 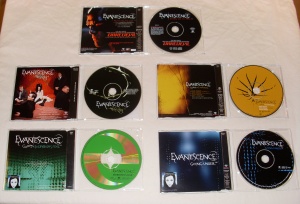 SAMPCS being the first part of the catalog number
The Fallen era radio promotional discs released in Europe under the Epic (Sony International) label. One exists for each single released off of Fallen (Bring Me to Life, Going Under, My Immortal, Everybody's Fool & Missing). The Bring Me to Life SAMPCS single notably features a drastically different cover image and Daredevil Soundtrack information. Everybody's Fool and Going Under are fairly easy to find for sale online, the others, are much harder especially Missing. The Call Me When You're Sober European radio promo is not included in this category because it was released by a different label (Sony BMG). Several fans have managed to collect all the SAMPCS singles. 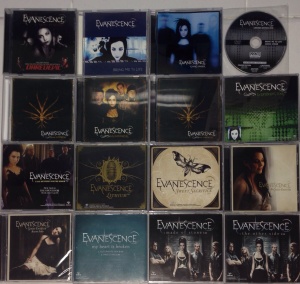 WUJC being the first part of the catalog number
Discs released directly from Wind-Up Records to United States radio stations. These discs are VERY rare and are often near impossible to find. They span the band's commercial career from Bring Me to Life to The Other Side.

These discs often include alternate single artwork and are always in full-sized Jewel cases (as opposed to a standard J-card single case). Earlier singles such as Bring Me To Life and My Immortal are especially rare, but more recently, the Good Enough and Sweet Sacrifice WUJC singles are known to be quite elusive. Besides the CD singles, there has been so far only one WUJC DVD single containing the videos from Bring Me to Life and Going Under. There are several collectors close to owning every WUJC single; however, no one is really known to have all of them yet.