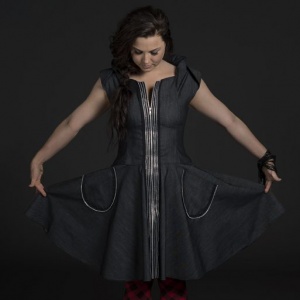 Amy Lee (born Amy Lynn Lee on December 13, 1981 in Riverside, California) is the co-founder and lead singer of Evanescence. Her family moved around the US a lot to places such as West Palm Beach, Florida and Rockford, Illinois, before finally settling down in Little Rock, Arkansas, where Evanescence was formed. Amy is the main songwriter and provides the image for the band as well as doing most of the interviews. Ben Moody discovered Amy at a summer camp in 1994 when she played Bach, Beethoven, Mozart and two measures of Meatloaf songs on the piano.[1][2] After that, the rest is history. 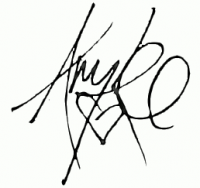 Lee has no trademark style with the "Faux Gothic". She dyed her hair jet black, though her hair is actually light brown. She dyed her red in 2013 until 2016, when she dyed it back to black.[3] She chopped her hair off in late 2008 and showed her new haircut during her Legends & Lyrics performance in February 2009. She also designs many of her own clothes, including those worn in the music video for "Going Under"[4] and the dress she wore at the 2004 Grammy awards. After she designed it, she chose Japanese designer H. Naoto to make it for her,[5] although she does sometimes make her own clothes. In concerts, she used to often wear a corset and fishnets, but she has abandoned corsets in the 2011-12 Evanescence album tour, with Amy saying with an interview with VEVO Stylized that she has become more comfortable with her own style.[6] Amy used to have a notable piercing on her left eyebrow which she had taken out and had re-pierced a few times, but she took it out for good sometime in mid-2005.

Many fans praise Lee for her refusal to emulate other celebrities by using sex appeal in her music. She has stated on a number of occasions that she would never flash her breasts or engage in other publicity stunts that would draw attention to herself. In fact, in the music video for Everybody's Fool, she aimed to mock such artists by suggesting celebrities who use sex to appeal to an audience are, in fact, merely peddling "lies" (the unifying theme of the music video).[8]

In her personal life, she enjoys being a girl. Her clothing style is quirky and marked by her frequent use of not-so-goth clothes (she stated in an interview with AOL that she was wearing "something floral"). She explains it as a professional thing, saying that her image onstage is so different from her normal clothes because it completes the image; if she were to come out onstage in pink boots and a track suit and sing about despair, it would totally ruin the image.

Amy Lee was honored with the National Music Publishers' Association Songwriter Icon Award for 2008. She received the award on June 18 in New York City.[9] This award is very privileged as only one person gets it per year out of the whole music industry. She also performed for them. The Icon Award recognizes outstanding songwriters for personal achievement and who personify the vision of NMPA and the goals of its members. Former recipients include Jimmy Webb and Neil Sedaka.

Amy Lee attended the Betsey Johnson Spring 2009 Fashion Show on September 9, 2008. She was there with Kelly Osbourne. 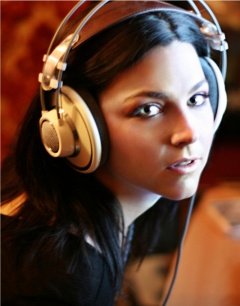 Later in 2011, during an interview with Billboard, she said that while the material made with Steve Lillywhite was scrapped, they may end up on future projects someday.

However, she revealed in 2015 that the album produced by Lillywhite was scrapped by her label and that she "was told that none of the songs I'd been pouring my heart into for a year, in any form, were good enough." She was forced to start over and release what we know now as the self-titled album.[16] She further said she owns those unfinished recordings, adding she plans to finish some of the scrapped songs and release them someday.

On December 1, 2013 Amy announced that she and Dave Eggar scored an independent film called War Story. The soundtrack album, titled Aftermath, was released in August 2014.

In 2015 she scored Hammerstep's short film Indigo Grey: The Passage.

In 2016, she released a covers EP, Recover, Vol. 1, as well as her second solo album, Dream Too Much, a children's album that was inspired by her son Jack. The following year she released two stand-alone singles, Love Exists and Speak to Me, the latter being the end title song of Voice from the Stone. She also scored the 2017 film Blind, and its soundtrack album was released in January 2018.

Out of the Shadows

In 2005, Amy became a spokesperson for the Epilepsy Foundation and launched a campaign called Out of the Shadows. The goal is to help spread awareness about epilepsy and to encourage people to not discriminate against people with epilepsy. This campaign is important to Amy, as well as her family, because her younger brother had epilepsy and she has seen first hand the effect it has.

To Write Love in Her Arms

Amy is supporting To Write Love on Her Arms, a non-profit movement dedicated to presenting hope and finding help for people struggling with depression, addiction, self-injury and suicide. Her husband, Josh Hartzler, has a counseling background.[17] Amy was wearing a T-shirt of the movement on November 12, 2007, in Nissan Live on Yahoo! Music.

On January 22nd, 2010, Amy announced on her Twitter account the release of "Together Again" to the public, after the Haiti earthquake events - "Today @Evanescence is releasing a new song, Together Again, and the proceeds are going to help Haiti! Details to follow!". If you were to donate at least five dollars or more, you would receive this song. According to Amy, the song successfully raised over $31,000 in its first week of availability.

In 2010 and 2012, Amy supported Restore Freedom to help the campaign against sex trafficking and for the construction of the first "safehouse" in NY, to host the victims of sex trafficking. In the Restore Freedom official website, Amy had a personal page where it was possible making a donation to support the project.[18] The campaign raised over 125,000$. She also donated a piano to the safehouse and taught music to the survivors.[19]

In 2000, Amy sang guest vocals on David Hodges' songs Breathe (The Summit Church: Summit Worship CD) and unreleased song of his called Fall Into You.

She did back up vocals on Big Dismal's song Missing You off of their 2003 debut release CD, Believe.

Did some vocals on the Underworld soundtrack in 2003 but after some issues with her record label her voice was never used.[20] Her name still appears in the credits though.

Amy collaborated with a supergroup called The Damning Well in 2003. She recorded guest vocals on their song Power, but because of issues with Wind-Up, the song was never released.

Amy is featured on Seether's song Broken. The song was released as a single in 2004 and can be found on The Punisher soundtrack and on Seether's Disclaimer II album.

In 2004, Amy claimed to be working on music for The Chronicles of Narnia: The Lion, the Witch & the Wardrobe,[21] but it was rejected for being "too dark" and "too epic."[22] However, the producers of Narnia stated that she was never asked to compose any music for the film. She later revealed that Together Again (previously referred to as The Narnia Song) and Lacrymosa were inspired by the film, and a part of The Narnia Song was used to segue into Good Enough.[23] The latter two songs were released on The Open Door and the former was released as a charity single in 2010.

She appears on KoЯn's 2007 MTV Unplugged album on the track Freak on a Leash. The song was also released as the first single.

She sang Epiphany with Aaron Lewis from Staind, at My Coke Fest 2007 held in Johannesburg, South Africa.

Amy also appeared with Finger Eleven to duet on their song, One Thing.

In 2008, Amy Lee made a remake of the song Sally's Song from the movie The Nightmare Before Christmas (1993). The cover is featured on the Nightmare Revisited soundtrack which was released in September 2008 in the U.S and 27th October in the U.K., published by Walt Disney Records.[24]

Amy joined Lzzy Hale on stage to duet on Break In several times whilst they were on the Carnival of Madness tour in 2012. On July 31, 2020, a studio version of the duet was released as the first single off Halestorm's Reimagined EP.

Amy was asked to play piano on Veridia's song, I'll Never Be Ready, and has performed it live with them several times whilst touring together.[27]

Amy sings backing vocals on the song, All About Anna, from Dave Eggar and Chuck Palmer's EP, Cellogram which was released in 2018.

Amy features on Lindsey Stirling's 2019 album, Artemis, on the song Love Goes On and On.

Amy is featured on the song Sakura Rising from Wagakki Band's sixth album, Tokyo Singing, which was released on October 14, 2020. The deluxe edition includes a DVD for February's Symphonic Orchestra concert in Osaka, Japan where Amy performed as a guest. The song was released as a single on September 18, 2020 with a accompanying animated lyric video depicting New York and Tokyo amid the coronavirus pandemic.

Amy is featured on the song One Day the Only Butterflies Left Will Be in Your Chest as You March Towards Your Death off Bring Me the Horizon's 2020 EP, POST HUMAN: SURVIVAL HORROR.[28] The EP was released on October 30, 2020.

Tools of the Trade

On tour, Amy uses a Baldwin baby grand piano with a keyboard insert (a baby grand piano shell with an electronic keyboard instead of an acoustic piano on the inside). She also uses a stand-alone Baldwin keyboard and Shure Microphones. She has used a Kurzweil and a Yamaha digital piano during the Fallen Tour. She's also been using a Roland RD-700sx keyboard since 2009. She uses a Korg synthesizer attached to her piano since 2012 when she performs Swimming Home.

In her home studio, she uses ProTools, Dynaudio speakers and a US7 mic that was used to record vocals on Fallen, plus plug-in softwares, a Akai Midi keyboard and various keyboards.[29] She also has a theremin and a Moog Taurus synthesizer.[30]

At the 50th Grammy Awards, Amy disclosed that she was working hard learning the harp, practicing two hours a day.[31] She was taught by Kirsten Copely, who later performed on Evanescence's fourth album, Synthesis.[32]

Amy Lee does not have a personal MySpace page or Facebook profile. There are several impostor pages on both sites claiming to be Amy Lee. They are not real.[33]

She has also stated this again in October 2009 in a response to a user on Twitter:[34]

Amy has a Twitter account, created September 22, 2009, with the nickname of AmyLeeEV. With this profile Amy keeps fans updated about news. She revealed this writing this post on EvThreads:[35]

Amy also has an Instagram account, created December 8, 2013, with the nickname of amylee. She mainly uses this profile to share things about her personal life with her fans. She revealed its creation with a post on her Twitter, which gave a link to her profile. 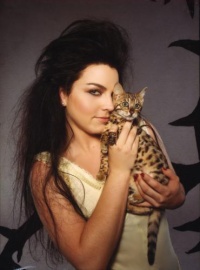 Amy and her cat. 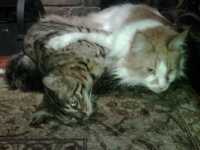