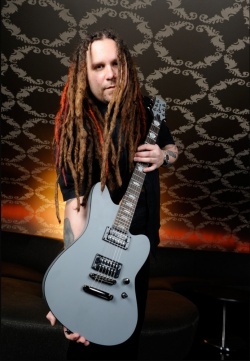 Terry Balsamo (born October 8, 1973, in Jacksonville, Florida) is the former guitarist and songwriter of Evanescence from 2003 to 2015. His style and sound have most definitely made an impact on the band, and with astounding results. He became Amy Lee's main collaborator for Evanescence and co-wrote most of The Open Door and Evanescence. Amy said about the writing process of The Open Door:[1]

Terry made his start in the music world as an early member of the now infamous Limp Bizkit. He left a few years before the recording of Bizkit's now classic album 3 Dollar Bill Y'All (1997), being replaced by Wes Borland. In late 1999, Terry joined up with fellow Jacksonville rockers; Scooter Ward, Sam McCandless, Jeremy Marshall and Kelly Hayes -- otherwise known as the monsters of Alternative Metal, Cold.

Terry remained with Cold writing and recording with them for their epic yet underrated albums 13 Ways to Bleed on Stage (2000) and Year of the Spider (2003). Near the end of his stint with Cold, the band had joined Evanescence as an opening act on the 2003 Nintendo Fusion Tour. This was of course before the abrupt departure of Evanescence's guitarist, Ben Moody. Terry had filled in for Moody on stage with Evanescence after Moody left during Evanescence's European tour, and when Cold's future suddenly became questionable, Terry jumped ship signing on permanently with Evanescence.

In November 2005, Terry suffered a stroke from a torn neck artery which landed him in the hospital for an unspecified amount of time. Indeed, headbanging was the cause of the stroke.

In November 2007, he had claimed to have recovered "a good 50%" from the stroke, getting better every day. He then toured with the band full time.

According to Limp Bizkit fansite, Terry Balsamo was suposedly going to replace the former guitarrist Wes Borland. The band is rehearsing something until now unknown. From MTV.com, it was confirmed that Terry is just doing a project with Sam Rivers.

Terry returned for Evanescence's third studio album, Evanescence, recording both Lead Guitar and Rhythm.[3] He toured with the band on their worldwide tour from 2011 to 2012, and his last live show with Evanescence was at the Wembley Arena in London, UK on November 9, 2012.

In 2015 when Evanescence announced their first live show in three years at Ozzfest Japan, Amy confirmed in an interview that all of the previous band members will return. However, on August 7, 2015, Evanescence announced Terry's departure on Facebook. It's currently unknown publicly why he left, but it's clear from the announcement that it was not on bad terms. He was replaced by German musician, Jen Majura.[4]

On July 8, 2016, Cold posted a statement to their Facebook page confirming that Terry has returned to the band, and that they will begin recording their new album next month.

In January 2018, Cold posted to Facebook that they are in the final stage of production with their new album and confirmed the band's line-up, which didn't include Terry. When a fan questioned why Terry wasn't touring with them, Cold responded that they "love Terry very, very much" and "possibly one day he will play with [Cold] again". Another question was asked if he was gone for good, to which Cold said that they are "not sure about that" and they are "sure Terry will explain everything to everyone some day." and added that "[they] love T and will always be [there] for him! He’s just doing what he needs to do at the moment".[5]

Terry attended Evanescence's Synthesis Live show on August 20, 2018 in Jacksonville, Florida and multiple pictures of him with the band, including Jen, were posted to social media.[6][7][8][9][10]

Tools of the Trade