Synthesis is Evanescence's fourth studio album that was released on November 10, 2017. The album contains reworked music from their previous three albums and two new songs that all focuses primarily on orchestra and electronica. This is the first album to be released independently since separating from Wind-Up Records in 2014.

Amy first hinted about remaking Evanescence music "in a different way" on a Facebook Q&A on February 29, 2016.[1] No further information was revealed until Amy was interviewed on AOL's BUILD series on September 30, 2016;

On February 13, 2017, Evanescence's publicists at Mercenary Publicity released a statement saying that Amy is in the studio working on new Evanescence music that's expected to be released later in 2017.[3] Although Amy didn't confirm whether this was true or not at the time. Then finally on May 10, 2017, Amy posted a video to Evanescence's Facebook account revealing that the "special project" the band are working on is Synthesis.

The album had two promo singles and two commercial singles. Bring Me to Life (Synthesis) was released on August 18, 2017, Imperfection on September 15, 2017, Lacrymosa (Synthesis) on October 27, 2017 (although this was not officially announced), and Hi-Lo featuring Lindsey Stirling on June 8, 2018. Imperfection and Hi-Lo had official music videos made by Paul R. Brown.

The worldwide tour for the album included the band members, a full orchestra, producer Will "Science" Hunt on percussion and programming, and Susie Seiter as the orchestra conductor. It spanned from October 14, 2017 until September 8, 2018. The Summer 2018 tour included Lindsey Stirling co-headling with Evanescence, and they took it in turns to open and close the shows. A live album in support of the tour, Synthesis Live, was released on October 12, 2018.

This is the full statement from the video: 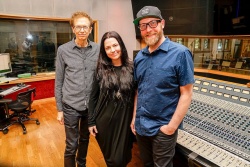 David Campbell, Amy Lee and Will B. Hunt at Ocean Way Recording Studios in Nashville, Tennessee.

On May 23, 2017, pictures surfaced on Instagram of Amy Lee recording piano at the Dark Horse Recording Studio in Nashville, Tennessee. The photos have since been deleted, but were originally uploded by cinematographer, Jeff Molyneaux, who was recording behind-the-scenes footage at the time.

Recording took a month-long break as Evanescence began their European tour. Then in August 2017, the band flew to Will B. Hunt's studio in Fort Worth, Texas, to record their parts and to finish off the album.

Inside Synthesis is a video series featuring behind the scenes interviews and music of the recording process of Synthesis.

Imperfection is the first music video that was released for the era. It was filmed in Los Angeles, California on September 15, 2017 and was directed by Paul Brown. Some behind the scenes teaser videos and photos were posted to Instagram by the band and Tim McCord's wife, Dani McCord. It premiered on NME on October 19, 2017, before being available on Evanescence's VEVO channel.[5] An exclusive behind the scenes video was later published by Revolver.[6]

On March 30, 2018, a poster at Evanescence's show at the Royal Festival Hall in London, UK stated that both performances at the venue will be recorded "for use in a music video".[7] Amy confirmed that Hi-Lo is the next music video in a live Facebook Q&A with Lindsey Stirling. Lindsey filmed her parts for the video seperately and it was once again directed by Paul R. Brown.[8] The music video was released on YouTube on June 8, 2018.[9] 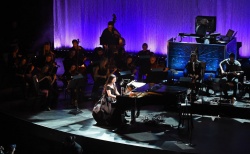 Synthesis Live is what Evanescence called their tour of Synthesis. They toured worldwide with a full orchestra from October 14, 2017 until September 8, 2018. They played the album in full, but not in order, and the orchestra selections and encores changed on each leg of the tour.

On March 5, 2018, Lindsey Stirling uploaded a short teaser video labelled "Dreams coming true, Summer 2018", and the video featured Lindsey jokingly talking about being a "casual" Evanescence fan, with the camera panning out to band merch covering the walls as well as Lindsey wearing an Evanescence t-shirt and gloves. Her phone then rings with Bring Me to Life as her ringtone with text from Amy Lee asking "What are you doing this summer?", the screen then cuts to the Evanescence logo with the words "Summer 2018".[10] The next day, Evanescence confirmed that they will be co-headlining a tour with Lindsey in the United States and Canada in Summer 2018 from July 6th to September 8th. Pre-sale tickets went live on March 7th, and general sale began on March 9th.[11] Both artists took it in turns headlining the shows.

Evanescence's performances of Hi-Lo during the Summer 2018 tour included Lindsey playing her violin solo live. When Lindsey played her song, Shatter Me, Amy Lee would sing the vocals. During the first half of the co-headlining tour, when Lindsey headlined, Amy and Lindsey would perform a cover of Young and Beautiful by Lana Del Rey to finish off the night. And for the rest of the tour, when Evanescence headlined, the band and Lindsey would perform a medley of Palladio, No More Tears by Ozzy Osbvourne and Alive by Sia.

During Evanescence's concert in Connecticut on November 3, 2017, the VIP attendees were told that the show was being recorded for a live DVD. The two opening songs of the show, Never Go Back and Lacrymosa, were streamed live on Evanescence's Facebook page. The photographer for the Synthesis shoot, Paul Brown, posted behind the scenes pictures on Instagram working on the recording of the show.

An interview with Amy Lee was published on November 10, 2017 by French radio, La Grosse Radio, to which she confirmed that there will be a Synthesis Live DVD. It was officially announced on August 8, 2018 with a release date of October 12, 2018. The DVD will be available in multiple formats; DVD, DVD/CD, Blu-ray, Blu-ray/CD and Digital.

Credits taken from the liner notes of the album booklet.