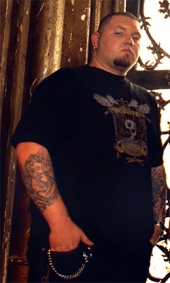 Rocky Gray (born July 2, 1974 as William Gray) was Evanescence's drummer until 2007. Worked with John LeCompt when John was a lead singer in Killsystem. Also worked with LeCompt when John laid vocals on “Seems Like Forever” for Soul Embraced’s Immune album. He made his first appearance with Evanescence in 1998 where he performed the drums on the track "Understanding" on their first EP. Gray is credited for writing the original version of "Tourniquet" for Soul Embraced (originally called "My Tourniquet") and revamping it on Fallen. In 2005, Rocky launched a clothing line called 'CrimeWave Clothing'. He recorded drums on The Open Door. He is currently in 4 bands: Soul Embraced, Living Sacrifice, Mourningside, Fatal Thirteen and We Are The Fallen.

Rocky officially left Evanescence on May 4th, 2007 for unknown reasons. Some people believe he did it in order to protest over John getting fired, but this wasn't the reason. Rocky had already decided to leave Evanescence in January (probably because he wanted to work on his side projects, but this is just a theory). His contract with Wind-Up said that he had to finish the tour first. He wasn't allowed to say anything about his plans about leaving either. When John was fired, he defied Wind-Up and told the fans anyway.

Immediate family includes his wife, Reneé, and his two kids, Abraham and Madison. Reneé is well known in the Evanescence fan community because she used to provide inside information on new developments when the rest of the band was unavailable. Reneé was even the first person to tell the fans that Amy was getting married.

He is frequently featured in advertisements for the equipment he proudly uses.