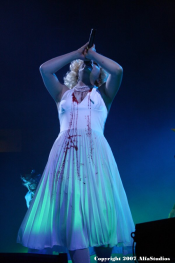 The Halloween Concert is a concert that was held during the Winter Tour (See Concerts). This concert was held on 10/31/07 at the Dodge Arena in Hidalgo, Texas. The special thing about this concert was that Amy and the whole band dressed up. Amy dressed up as Marilyn Monroe, Will Hunt as Micheal Myers, Tim as Satan, Terry painted his face white, and Troy was the Burger King. Some pictures of the concert were taken by fans and are now on the internet.