The Making of Fallen 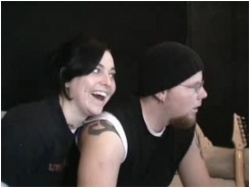 Amy and Ben in the video.

Filmed by Amy Lee and Ben Moody, an unreleased 53 minute video on David, Amy, Ben, and Josh Freese recording Fallen in Los Angeles, California. They work on many songs including Missing, Farther Away, Going Under, Bring Me to Life, Everybody's Fool, Whisper, and Imaginary. Josh Freese plays drums throughout the session.

Amy's husband, Josh Hartzler, also makes a brief appearance in the video (they were not dating at the time).

The full video can be watched on Dailymotion.com.