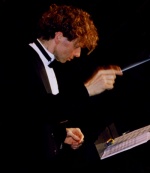 David Campbell composed the string arrangements for Fallen, The Open Door, Evanescence,[1] and composed the orchestra on Synthesis. He also performed My Immortal with Evanescence at the 2004 Billboard Awards.

He is a Canadian-born music arranger, composer and conductor who has been featured on many popular albums. He was born in Toronto, Ontario, Canada and has three children: musician Beck, artist Channing, and singer/song writer Alyssa Campbell (who also sang with the choir on The Open Door).