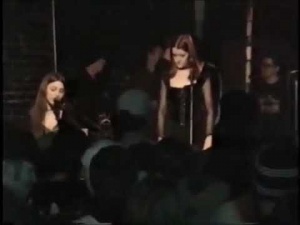 In September 2019 Nick Williams posted on his YouTube channel a video of what appears to be credited as the first Evanescence live performance ever taped.[1][2] During that night at Vino's, between 2 and 3 January 1999, all the copies of Evanescence EP were sold for $15 each.[3][4][5] Before that night, the EP was sold to family and friends in December 1998.

This is the first live footage of So Close and the earliest footage of Lies, performed one year prior to its release on Origin. This is the Gabriel (Gabe) Harrell's precious testimony reported on "the very first website", We're Not Goth, created by him shortly after this show and the pubblication of the firt EP of the band: