The Game is Over

The Game is Over is the second single from Evanescence's fifth studio album, The Bitter Truth, which was released on July 1, 2020.[2] The title was published on the music repertoire website, ASCAP, before its confirmation of being an official song.[1] This was the first song written for the album when the band got together to write in 2019.[3]

The song is described as "a protest against the facades we are pressured to put on by society. In the face of depression and anxiety - and especially in a world that seems to crumble further each day - it’s a cry to end the charade that everything’s fine."[4] Amy also added:

Fans who pre-saved the song on streaming services entered for a chance to join a Zoom call with the band and hear the song before its release.[2] Watch a clip from the Zoom call here.

On July 15, 2020, the signed lyric sheets from the Zoom premiere of the song were auctioned on eBay and all the proceeds were donated to Black Lives Matter.[5] Each lyric sheet was handwritten and signed by Amy on the back of a rare Evanescence poster.[6]

The Game is Over

Had enough, I've really
Had enough
Had enough of denial
I'm not alright but I'm not gonna lie
I don't know that I ever was


All alone, I've waited, all alone
Held it in as I played by your rules
I've been biting my lip
But I'm losing my grip
I'm coming down, down, down

When all the hate burns off, I'm left here with the pain
Behind our vain devices, are we all the same?
Ooh, ah, ah, ah, ah
Change me into something I believe in
Change me so I don't have to pretend


Throw the rope, I'm wading through the mud
From your mouth flow a thousand truths
But you know
There's only one

When all the hate burns off, I'm left here with the pain

Sweet words they mean nothing, they're not true
'Cause the game is over

I want it all, or I want nothing at all
Maybe I can
Change me into something I believe in
Change me so I don't have to pretend
Your sweet words they mean nothing, save your breath
The game is over 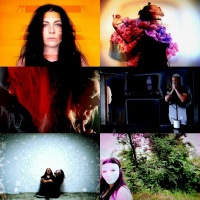 Screenshots from 'The Game Is Over' music video.

The official music video for The Game is Over was premiered on YouTube on July 3, 2020 at 12N ET / 9AM PT, with Amy also taking part in a fan Q&A. The clip is described as a nightmarish, effects-laden look at the emotional havoc that this period has wrought. Despite being restricted to shooting themselves on iPhones, the band, in collaboration with director P.R. Brown, managed to create a stylish video capturing the metaphorical monsters within us.[4]

In the live comments just before the video's premiere, Amy explained the theme and inspiration behind the video:

Main article: The Game is Over Single

Tracks released with the single include: