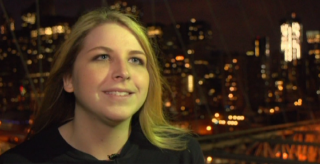 Carrie Lee during the making of the What You Want video

One of Amy Lee's two sisters, fans know her for collaborating with Evanescence several times.

Along with Lori Lee, Carrie provided the background vocals for Call Me When You're Sober. She also wrote the screenplay for the What You Want music video. Carrie was present for the making of the What You Want video, and this is what Amy said about it:

Everybody's Fool was inspired by Carrie's fascination with pop stars such as Britney Spears and Christina Aguilera. Amy said that Carrie, who was eight at the time, started to dress as the two superstars and that it angered her.[2]

In June 19, 2011, Carrie uploaded a video on YouTube (under the username "PatootyBear") dedicated to her father, John Lee, for Father's Day.[3]

Carrie provided backing vocals for Amy's children's album, Dream Too Much, on the song I'm Not Tired.[4]

In 2020, she and her sister Lori collaborated with Evanescence again by providing backing vocals on Use My Voice off their fifth album, The Bitter Truth.[5]