Aftermath is a film soundtrack by Amy Lee and Dave Eggar for the 2014 film War Story. It was released on August 25, 2014 to the iTunes Store and Amazon.com.[1][2] A snippet of a song from the album, "Between Worlds", was uploaded to Amy's YouTube channel and Evanescence's Vevo channel on August 6.[3][4] Another snippet of the album, from "Voice in My Head", was later uploaded on the same two channels on August 11.[5][6] 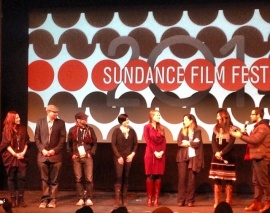 Amy and Dave at the War Story panel after its premiere at the Sundance Film Festival.

Amy first revealed that she and Dave Eggar scored the film War Story in December 2013 on Twitter.[7] A month later in January 2014, she had an interview with MTV News where she revealed that the new material is going to "suprise" her fans. She explained: 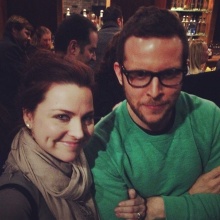 Before the interview was released, it was revealed that Amy is suing her label Wind-up Records for withholding $1.5 million in royalties.[9] Amy later said that it would be best for her to remain quiet about the issue.[8] Two months later, she announced that she is free from the record label deal and that she is free to do whatever she wants.[10]

The recording process for the album took a period of about a year and a half, from 2013 to 2014.[11] Dave Eggar stated in an interview with Games of Evanescence that the process of the recording was "really fun" and that they changed many things during this process. He also said that they decided to add music which was inspired by the film but not included on it, so that the listener could become a "part of [their] journey".[11]

The artwork for the album was created by graphic designer Dan Mandell. Dave Eggar said in an interview that the artwork captured the spirit of the album and the "conflict between freedom and confinement" which he says is a strong theme in War Story.[11]

In the first week after its release, Aftermath sold about 6,000 copies in the United States.[12]