Bring Me the Horizon 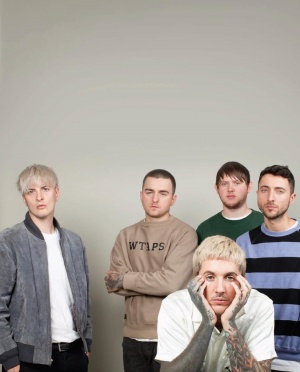 Bring Me the Horizon (often abbreviated as BMTH) are a British rock band formed in Sheffield in 2004. The group consists of lead vocalist Oliver Sykes, guitarist Lee Malia, bassist Matt Kean, drummer Matt Nicholls and keyboardist Jordan Fish. They are signed to RCA Records globally and Columbia Records exclusively in the United States.

Oliver Sykes cleared up on Twitter that it wasn't true when he said his band was sued by Evanescence. He went on saying that both bands' managers exchanged words and songwriting credits were offered to Evanescence.[5] Amy also cleared up the misunderstanding:

On October 14, 2020, it was announced that Amy Lee is featured on the song One Day the Only Butterflies Left Will Be in Your Chest as You March Towards Your Death off their nine-track fourth EP titled POST HUMAN: SURVIVAL HORROR, which was released on October 30, 2020.[7]

On November 6, 2020, they released a 13-minute documentary offering insights into the making of the aforementioned EP. It features input from Amy Lee explaining how she came to guest on the EP.[8]

On December 8, 2020, they released a behind the scenes video of their collaboration with Amy. Watch it here.