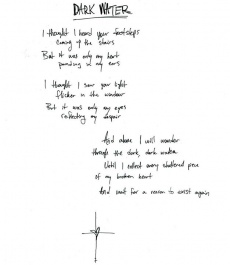 Lyric sheet of "Dark Water", posted by Amy on Facebook.

Dark Water is the fourth track from Amy Lee and Dave Eggar's soundtrack album, Aftermath, written for the movie, War Story. It features vocals from world singer Malika Zarra; when asked about this in an interview, Amy stated:

On August 18, 2014, Amy started a competition on Facebook, Instagram and Twitter. People would post their favorite Amy Lee lyric of all time with the hashtag "#AmyLeeAftermath" and the winner received a signed copy of the original lyric sheet for "Dark Water".[2]

(from image posted by Amy)

And alone I will wander
Through the dark, dark water
Until I collect every shattered piece
of my broken heart
And wait for a reason to exist again